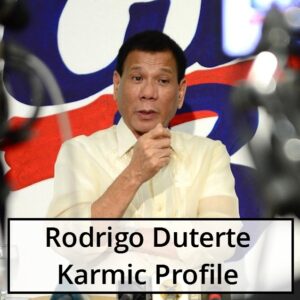 Evolutionary Astrologer Tom Jacobs puts a human face on the president of the Philippines by offering a karmic profile to explain this soul’s journey.

Duterte’s war on drugs and crime is cleaning up the streets through what has added up to mass murder by police he’s directing and vigilante groups he’s encouraging. He sees drug dealers and users as not human, and Tom’s focus here is to provide insights from a bird’s-eye view of this soul’s journey and how a person gets to be that way. It’s critical to learn to avoid meeting hate with more hate, and Duterte – like Donald Trump, Vladimir Putin, and Glenn Beck, among others – offers an opportunity to explore this.

Emphasis is given to the nodal structure, South Node ruler Saturn in Cancer in the opposite sign of the SN, Pluto retrograde in Leo, and the Chiron-Moon-Neptune conjunction in Virgo-Libra.