As some know, I live in Tucson, and the largest gem and mineral show in the world coalesces here this time of year. Essentially, the world comes here to give me a chance to see and buy rocks and gems. It’s pretty cool.

I’ve been to a few venues so far, the ones I always go to. I get certain things from certain people, and I look around for new things. Rarely do I go to shows that don’t include rough rock, as I typically like to cut and polish things myself if I can/if it’s feasible. 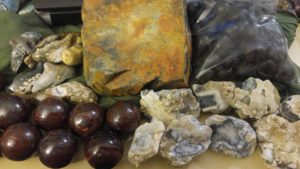 My loot from the other day includes – clockwise from upper left: 10 sea jasper carved dolphins, a 5-pound rough slab of black tourmaline, a bag of tumbled shungite, raw dendritic opal pieces, and tiger iron-ish spheres (hematite with some red jasper and sometimes red tiger eye) that will be infused with Archangel Metatron’s energy.

The latter is not really the kind of tiger iron I use for general grounding, but they will work well with Metatron’s energy for moving through blocks in your body/consciousness and connecting everything together.

Larimar (Dominican Republic) for opening and stabilizing the 5th chakra and shiva lingams (India) for stimulating creativity and sexuality also have been procured, and some thin slabs of various kinds of flashy onyx (Oregon) for absorbing negative energy. 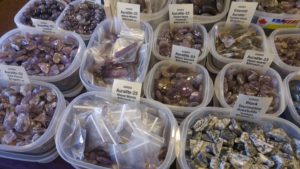 The most exciting find was today: auralite 23 spheres. I found them as part of a display in a shop at one venue. There were enough options – polished wands, two sizes of spheres, palm stones, lil’ hearts, and more – that I had to stand there for a bit and get over my shock.

This is exciting because I can’t imagine tumbling or cutting them because the material is so precious to me … but I sometimes want a polished shape. I picked up 8 small spheres and programmed them this afternoon, and they are fantastic. They’ll be on my site soon. 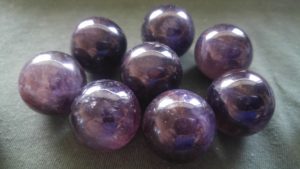 While I don’t mind holding large unpolished wands and, even, putting them in pockets, I know that some people might prefer smaller, smoother shapes to carry around with them.

Finally, today I also purchased 5 smaller moldavite pieces wrapped as pendants, which will go to my site soon, too. And did you know that I’m offering a sale on select programmed moldavite pieces through the end of Sunday, February 4th? Use my moldavite to push into your next evolutionary phase and learn to cease leaving room in your consciousness for disempowering narratives. Read more, watch a video about moldavite, and order yours here. 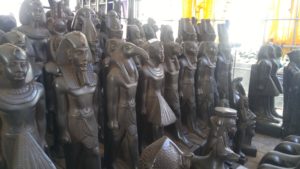 You never know what you’ll find wandering around a gem show venue. As I said, people from all over the world come here for this event. I happened on an Egyptian vendor with all sorts of things including statuettes, and did spy two of Djehuty, a.k.a. Lord of Wisdom and so many other names. He’s the one with the pointy nose center-left. This is his form as the Ibis Headed One, another name used for him.

More over the coming days.