Ah, spirit. The many varied and odd directions you choose to nudge me.
-Tom’s Brain, continuously from 2003-2015

Months ago I was guided to stay away from the local lapidary club, after being violently screamed at for no good reason by an immature tyrannical figure beyond reason and beyond the hope of ever finding it again. “Gosh,” I wondered, “does that mean the charged stone thing is complete?” The answer from Metatron was that I would buy my own diamond-bladed lapidary saw, to which I queried in disbelief, “Sha-waah??” 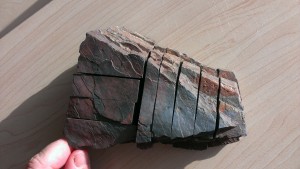 h a machine takes a chunk of rough rock and cuts it into slabs of your design. See the pic at left for an example in tiger iron rough cut last year.

I wouldn’t say I’m not mechanical by nature, but I definitely am not the guy with tools or a workshop in the garage. Those guys I meet all the time in rock hound circles, and I think they feel sorry for me once they realize how not-like-that I turn out to be. They sometimes share jokes about how someone they know tried to use the wrong tool for some job or another, and as they laugh because it’s funny to people who are tool-oriented, I’m left wondering if I should laugh, too, and risk being found out to be very much not-like-that or not laugh and give myself away. 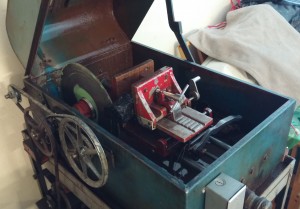 After purchase, delivery, and then a repair to the saw by a local saw guy, it’s not just in my garage but up and running! It’s, like, cutting stuff. This first pic is with the lid up so you can see the stuff and junk going on in there. There’s a vise to hold a rough rock (the red thingie in the middle). It’s mounted to a carriage hoopdedoo that clamps tight onto a threaded nut moved by the motor. That hoopdedoo slowly advances when the motor runs, bringing the locked-in stone against the diamond-crusted blade. 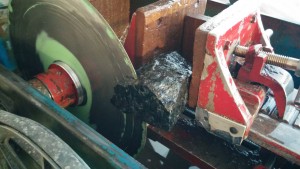 Here’s a tighter shot on the saw innards, showing a piece of rough spectralite mid-cut. The saw is turned off at this point, otherwise the blade coolant (oil) would spray everywhere.

Spectralite is just about the same as labradorite except the matrix is black/super dark grey instead of greenish-grey, mossy, and somewhat murkily translucent. The labradorite for sale on my site I’ve programmed energetically to boost and support intuition, as well as to ground it with body-based instinct/knowing. The labradorite I sell will connect the 6th chakra with the 3rd, effectively grounding intuition so you know if/when and what to do. Being intuitive means having access to multiple streams of information. It doesn’t guarantee that you’re grounded and know how to act on it. Labradorite on its own can increase intuition, but mine grounds it wonderfully. 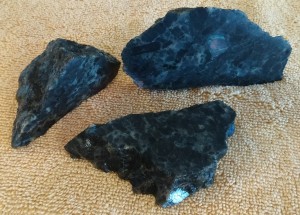 The first 3 pieces of rough spectralite cut from the 5-or-so-lb. piece in the vise now are pictured here. In time, I’ll trim down the rough edges on a grinding wheel and then either tumble a bunch of them together in my trusty vibratory tumbler, or finish them on grinding wheels to get a nice polish before programming with posterior-kicking healing energy. The factor in the end will be time and how that translates into cost, so we’ll see what transpires when the time is right.

This spectralite was sourced from a Swiss vendor at the Tucson Gem & Mineral show this past February. He mined this in Finland personally, and I love being able to trace it. Read more about my meeting with Sasha from einStein and what I learned from him here.

And, so, the rocky adventure continues.

On the personal crystal front, I’ve been reconnecting with auralite 23. I picked up my first pieces at the gem show in February and had some very cool experiences with it. In time I’ll program and sell pieces, but for now I’m still in the process of being upgraded by working with it. Stay tuned for that.

To see all 8 of the energetically charged stones I currently offer, clickyclickclick.