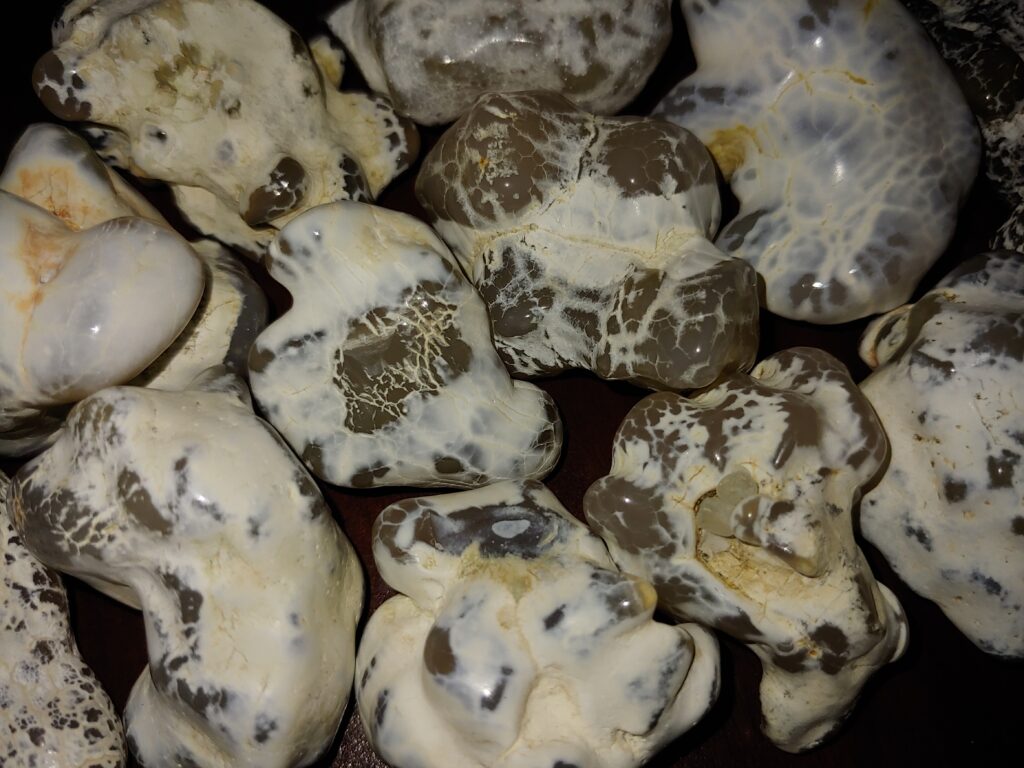 Agate is quite common and appears with slight variations in many places. Often it’s named for the place it comes from, yet snakeskin agate is named for its snakeskin-like texture. The material pictured below comes from Utah, and does have some color variations of a bit of yellow or beige, and also what appears to be little rust on some. I have not scrubbed them to try to get it off, just to preserve them the way I received them.

Among other things, it’s said to bring calm and peace, and to support increasing loving energy. Due to this, I began experimenting with it when working to calm strong emotions.

I was guided to program this agate with Reiki energy and then add a very intense and high-vibrating frequency not dissimilar to the one I use with programmed auralite 23, meant to raise the user’s vibration. The combination of these two energies has a remarkable effect: It stills excessive emotions and brings you back to center.

As I process my personal emotional stuff and connect with certain issues in the collective that activate or trigger me, I’ve lately had some emotional jags that have felt out of control, like I can’t stop crying, and it can go on for a couple of hours with only brief breaks. While it is critical to honor our emotions and allow ourselves to express them, it’s also sometimes true that we can get carried away and feel overwhelmed.

At various times during the last few weeks, I’ve tested what happens when I pick it up while feeling an intense emotion. Sorrow, grief, crying, anger or rage, hopelessness–all of these were stopped in their tracks and I was brought quickly to neutral.

When I write “quickly”, I mean instantaneously. You don’t have to carry one of these for an hour or for minutes–it should snap you into a neutral center in a moment or half of one. I’ve found the effect startling in that I am feeling so much, so much is flowing through me, and then I pick one up and suddenly I’m neutral. Almost like a whiplash, but it’s to a good place I need to get to and I’m calm.

At certain times when feeling waves of emotion coming up with tears, I picked one up and had a distinct feeling that I needed to let the tears flow and put it down again. I recommend using these judiciously and, again, allowing your emotions to flow when you can. But some of the times I’ve used it, I’m just too tired from too many emotions that week and need to hit the “pause” button.

It does seem also to bring objectivity to those emotions, allowing me to come back to them later with some perspective. Even picking up later the crying jag, but I don’t then feel out of control as I did before.

Personally, I use one of these for a few moments when I need it. I don’t carry it for long or go out with it in my pocket as I would with just about any other programmed stone or crystal that I use and offer. I get a weird feeling in my 4th chakra if I hold it more than a minute or so. I had my partner test one and she reported a good, calming, supportive feeling between her 3rd and 4th chakras, and I’m figuring that I simply respond to this particular stimulation in that part of my field differently than others might. Therefore, you might find that you enjoy holding or using it for periods longer than I do. I’m open to hearing your feedback so I can learn more if you get one.

A note on shipping: In the USA, $8.45 insured USPS shipping unless otherwise noted. I am not currently shipping internationally.

Note: There are 2 shopping carts; one for digital downloads, and another for other purchases.

Number of items in cart: 0

Your cart is empty