The more I reflect on the new book Conscious Living, Conscious Dying, I can see that Ascended Master Djehuty is giving us tools to overcome angst and its sources. When we wonder why we’re here and observe how life works, it can be perplexing. It’s hard to make peace with why things happen the ways that they do if life is supportive and the universe is loving, which we keep hoping is true.

We kind of can’t help but want and need it to be true, actually. But we keep seeing evidence that seems to mean it isn’t.

The new channeled volume from A. M. Djehuty (a.k.a. Thoth, St. Germain, and Merlin) explains what soul is, how it works through your human life, and how to learn to work with these facts to create the sense of meaning that all humans crave and tend to look outside for. It’s this looking for meaning that the existentialists were bent out of shape about and that lead to writing a bunch of stuff about how life is meaningless.

I got caught in this trap myself. In college and after I did some studying of existentialist stuff, always coming up short on the meaningfulness bit. If you don’t shut down in the face of the lack of meaning life seems to offer – including depression and self-destructive stuff that numbs you – then angst results. Some people internalize angst and others spray it all around for others to bathe in, too. But behind it is the need to find that life and the universe are supportive and that you belong here, that you are welcome, important, and loved.

Understanding what soul is and how to let its logic work through you is the key to creating meaning in life, what we each crave and the lack of which can lead us to spiral down into depression and avoidance-based behaviors that can become addictions. Djehuty says it best so you need to read the book to get the full picture of how to do this. 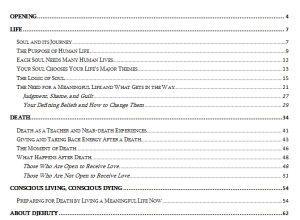 But as I channeled certain portions of it I could tell he means it as a healing balm, an antidote to the millennia we’ve lived on Earth trying to figure out why we’re here and how to enjoy it – how to make being here work for us instead of simply seeming to damage us.

What soul is and how it creates and experiences your human life including the purpose your human life serves for your soul is a major part of this new book. When you get this, Djehuty is clear, you can see how to choose to create the meaning for yourself that you have always needed and probably felt was lacking.

The reality and purpose of death is the 2nd section, including what happens at the moment of death and after. Djehuty wants us to live consciously so we can truly and fully be here now, living out what soul had us come here to do, and then die consciously, knowing that we understood what the point of all it was.

This is the most powerful material I’ve brought through to date from any source and I know that all people need to read it. Going through it to edit, my own process of healing some existentialist dread and spirals was stirred. Since I was 18 and first found Albert Camus’s novel The Stranger in high school English class, I had words for something awful I’d always felt. Then I went to college and read some (existentialists) Kierkegaard, Heidegger, Nietzsche, Sartre, and others, choosing to do the thesis required for graduation on Camus and the playwright Samuel Beckett.

I was a philosophy major. My original intention was do to trombone performance but the more music theory that got into my head, the less I enjoyed playing. Like music theory added something but I couldn’t really allow it to let me enjoy music any longer – semiotic tension that built to the point that I knew I couldn’t keep on keeping on. So I switched departments. I was taking a Philosophy 101 class and the professor had us read 5 or 6 texts, one of which was Dostoyevsky’s Notes From Underground. Seeing that philosophy could come out in literature lit a spark in me and I decided that it would be my major. Literature itself was less interesting because my very few experiences interfacing with people on that track were not inspiring. I wanted to know how to find meaning in life – and I could smell that a philosophy major was the way to go. It seemed more my speed.

But when I got deeply into Camus’s ideas I saw he was different than other existentialists (all of whom, by the way, would not enjoy being called that or being lumped together). He knew that when you found life to be lacking in the meaning you sought from it (an idea in common to all of them), you still had a choice to create meaning. Sartre seems to represent a culmination of existentialist thought and he offers no way out through anything positive. Reading him leaves a person either deeply confused about why to get out of bed going forward or righteously indignant to finally have florid and damning descriptions of why life is the crap hole it is.

But Camus’s meaning-creating thing could be through contributing something to your community, generating and spreading an idea or perspective that helped people, inventing something, being of service to someone in need – could be anything. He himself participated in the French resistance movement during WWII and in his native Algeria functioned as a journalist covering the – um, “plight” of the colonized natives and how they were forced to live under French colonial control. These were ways he chose to create the meaning he suggested we all create.

And then 3 years after first finding The Stranger I decided to do my thesis on it. I took Camus’s idea that an artist, seeking constantly to figure out how to create the meaning that he or she needs, only ever expresses one idea, one thing. I used his essay The Myth of Sisyphus and The Stranger to set up an exploration of 7 of Samuel Beckett’s short plays. Beckett essentially worked for something like 6 decades to perfect his dramatic devices and techniques to illustrate that life is meaningless. I attempted to show that Beckett spent his life doing this, which created daily for him the kind of meaning that he as a human needed to have, being a perfect example of Camus’s idea while in fact having a kind of meaning none of his own characters could.

Why am I on this tangent? Hmm, rewinding… Oh, because the new channeled book is bringing these ideas up for me. The whole thing about the search for meaning and not finding it – and then perceiving few options when (not if) one finds there is no meaning to be had in the external world – and what you do in response has been on my mind my whole life. And the more I let Conscious Living, Conscious Dying seep into and around my head space, the more I see it working on these subtle levels to do with my beliefs about life and a life history of working with what we might call existentialist questions and resultant dread and angst.

I think Camus’s stuff is a way to start easing out of the hopelessness that previous existentialist literature builds toward, and the new channeled book erases the context in which that depressive history was written – this new book is that important.

I expect this will be on my mind for a while so there may be other posts on this stuff. In the mean time, Conscious Living, Conscious Dying is available now through April 4th as a PDF e-book through my site at the link above. On April 5th I’ll launch it as a paperback on Amazon and my site and an e-book on Kindle.