One of the most exciting things I’ve seen thus far at the largest gem and mineral show anywhere – here in my hometown – is spectralite rough, pictured to the left. It is in some ways the same as labradorite, but the matrix is black, not green. Also, it comes from Finland. A key difference between the two is that all the colors of the spectrum can be in spectralite (hence the name) with some or many in labradorite.

I was guided to go to a venue almost 10 miles from my house, via bike. (Translation: I found myself going there on my bike but had no idea why or what I might find, sort of wondering WTF.) I had no intention of picking up anything big or a large quantity of anything, but when I saw these, I had to. The vendors are a Swiss couple (einStein Lapidary), offering all kinds of very cool things. I spoke with Sasha, the husband, and he told me he mined this rough himself, spending 6 months in Finland and obtaining a permit from the government to mine. He said he brought up an ungodly (my term) amount of rough – I think he said 20 tons.

Rough spectralite I haven’t seen before, so I was excited. I told him that was new for me, and he said he cuts most of the rough into thin slabs and then into small pieces for making cabochons to sell to those looking to make jewelry. At first, he thought he might direct me toward those beautiful little pieces, displayed in water near the front of the tent. Water brings out the colors in rough, unpolished rock, and it’s common at the gem show to find gorgeous things that haven’t been polished in gorgeousness yet in water or next to spritzer bottles so you can check pieces out yourself. I explained my purpose is to make stones for meditation and healing, and so the rough rock is definitely more attractive to me.

Most people, he said, don’t want the rough, and he usually doesn’t bring any. Last year at this show, someone told him he should bring some rough of this crystal and he did. At another venue days before I had purchased quite a lot of labradorite so wasn’t sure that I needed the spectralite, but felt inspired and purchased 29 pounds (most of the pieces in the above picture).

Other offerings included more rough rock from all over Europe, fossils, and hand-made rings (pictured here). He takes a rock, even one from their garden, takes a core from it, and fashions a ring from the core. The rings are displayed resting in the rock from which the core was taken, and to me, it’s so beautiful … I gushed over them. Inside each ring is silver, and Sasha said that he’s patented the process that yields these unbreakable rings. I’m not sure you can see this well in the photo, but most of them have a wavy design so the band shape is unique. You can, I think, see that some of them look a bit bent – this is intentional, and it’s striking. 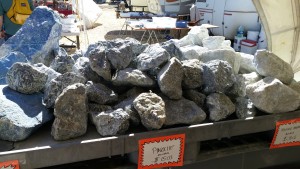 I include this photo to give you a sense of a common sight at certain gem show venues: tables piled with or bins full of chunks of rough rock. I happen to love this sight, and seek out the shows that list vendors selling rough rock. I do have access to cutting and polishing equipment through the local lapidary club, so I can afford to seek out and purchase rough rock. With the labradorite, I lucked out as I found pieces cut to the size and shape I wanted, but often I’m intending to create something that I can’t find, and have to deal with pieces of rough rock like these.

Right after taking these photos, I got back on my bike and pedaled the almost 10 miles with 29 pounds of rough rock in my shoulder bag, which was mostly fun because I knew I’d made a fantastic find and, because I bought so much, got an amazing deal.

Here are two more pics from einStein Lapidary’s tent. The first includes some ammonite and other fossils, and the lower one a view of another area of the tent including rough rock bins. 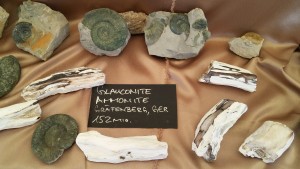 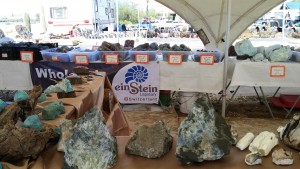 Tom Jacobs is an evolutionary astrologer, energy worker, and channel with a global practice of consultations, tutoring, and teaching. 15 books, 2 natal reports, a wealth of astrology and channeled audio, and charged crystals for healing and meditation are available via tdjacobs.com.