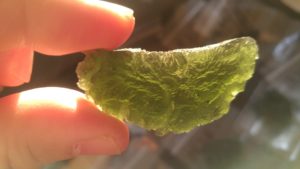 This morning I posted 17 new energetically programmed moldavite pieces to my site.

This unique tektite (glass formed from meteorite impact) is a potent transformer famous in the gem and crystal world for leading people into their next stages of growth. It was formed from the fireball that resulted from a meteorite hitting the Earth around 14.8 million years ago. It landed in what is now southeastern Germany and sprayed mostly to the east to what is now the Czech Republic. It it not the meteorite, not does it have pieces of the meteorite in it, but it has a decidedly off-world energy that will help you evolve beyond a range of limitations. 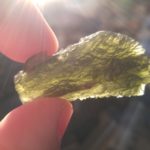 In my experience, programmed moldavite changes the shape of your energy field/consciousness to eliminate the space/room that disempowered thoughts and attitudes take up. When you’re first using it, this can be a sudden effect and seem magical – as if all of your issues/malfunctions have simply gone away – yet use over time requires that you be willing to train yourself out of the disempowerment. I still feel it as the best drug I can imagine (I often feel programmed crystals as altering my consciousness), as when I pick it up I know that I can function on a very high level and not feel/be stuck in whatever might tend to bother me.

It’s a material you sometimes have to get used to slowly. 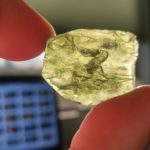 Smaller is often better for your first piece, as you – including your body and consciousness – will have to adapt to flowing in line with its very high frequency. I began with a 5-gram piece, then moved after a year or so of casual use to a 7-gram piece, and now work with the 7-gram piece plus a 12-gram and a 21-gram piece together. That’s what feels comfortable now, but it took a lot of getting used to at each step of the way. And I also get major upgrades to my own growth and healing when I program a new set.

You might feel a headache when picking one up for the first time, and this means that you’ve made first contact. Come back to it a day or two later and try again, as you’ll be able to hang with it once you get used to it.

Many people report a heat flush that either opens their heart or goes through their whole bodies. I haven’t experienced this, but have had unique, singular headaches when picking up 8 or more to energetically program them. The “feedback” from the pieces as I put energy into them is something that I have to adjust to. 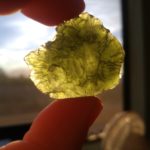 The intensity of that first effect, whatever it is, is proportionate to the size of the piece you get, which is why smaller can be better for your first piece.

All that said, you will know if moldavite is right for you or if it’s the right time. I strongly advise you to get one only if you are sure that it is calling you.

Yes, calling you. That’s how you know: You see or touch one, or even hear someone mention it, and you’re immediately hooked and just have to know more or get your mitts on one. This is typical for when moldavite is right for a person. So, if you’re hemming and hawing after hearing how awesome it is from converts like me ranting and raving about how it is, literally, the single greatest thing that

ever happened in the vastness of the cosmos … best to wait.

And that wait could be a few days or weeks – it doesn’t have to be forever. But you’re ready for what moldavite has to offer when you are clear that the vibration is calling to you.

It’s true of moldavite generally, and much more so because of the energetic programming I’ve brought to those I offer.

Check them out here, and be in touch over email with any questions. I do offer email support indefinitely for anyone who gets a programmed crystal or stone from me, so feel free to keep in touch about your experience even if you don’t have questions.

One note for subscribers to my monthly service: Due to larger pieces being noticeably more expensive due to rarity, pieces 15 or more grams are not eligible for the 25% off perk rate. There is a note in the entry of each piece fitting this criterion in the moldavite page.

On a final note about my process with this latest set: I didn’t feel off in any way when I opened the package and began holding them. I started putting energy into a handful slowly and felt fine, so after a half hour I picked up another handful, the whole time monitoring my field and body.

But nothing happened like during previous programmings, so I did some energy into all the new pieces in one evening … and it felt amazing. I felt that my favorite friend was here, and I got to spend all the time I wanted with it. (And began to doubt I could sell any of them …)

The next day I did a bit more energy into all of them, then later a 3rd round in handfuls at a time. But it felt great – no awkward or discomfiting feedback from the stones, no headache, no “the shapes are all wrong” confusion about my perceptions of 3D.

So, this morning when up at 2:30 for an unknown reason, I organized and labeled them, then took photos when the sun came up a few hours later. And everything was great. Then when I went back to bed around 8am, I felt entirely snoozified, couldn’t keep my eyes open but couldn’t relax into sleep, and then I realized that this is the effect of programming so many pieces in such a short time.

Usually I get 8 smallish pieces and program them, and the last time got 8 of a slightly bigger size than before and one larger piece. But this time I bought over 250 grams, including several relatively larger pieces, so it just took a while for it to hit me. I slept/didn’t sleep for a few hours and woke up entirely altered. About and hour and a half later I’m more me again, but do feel a bit slow and that my 6th chakra is a different shape. (That might sound frightening, but it’s not – I know I just got stretched a bit, which has happened from Djehuty and Metatron over the years and results in better grounding, more clarity, and my channel being open to them and spirit guides.)