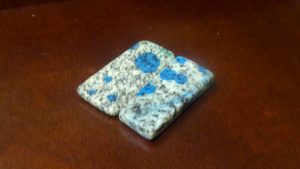 Pretty soon after publishing K2 Crystal Diary 1, I had a unique experience I can attribute only to using and connecting with K2. Then today, another thing happened that seems pretty obviously related.

The day after that post, I went to the gym for a workout. I was making rounds of the weight machines as I do, and saw a bunch of water bottles collected around the base of one when I sat down on it.

The same moment, I noticed that two people were watching me from about 8 feet away. Turns out they were taking a moment’s break between sets, trading off between them. I did my set and moved on to the next one.

The guy of the pair returned to the machine and let me know that he and the woman were using it, and he asked me to ask permission before using it again so they could stay in their rhythm.

I must have had a look on my face because he said, “Don’t take it personally.” I said I wasn’t, but that I would not be asking permission to use a machine. I could feel the energy of dismissing me, so I told him that if he’s using a machine for more than one set, then it’s his job to work around people who are doing circuits and just doing one set at a time. That’s the policy.

The energy of dismissal remained. When I was done on my machine I went to the trainer on duty and told her they were camped out on the machine, that they asked me to ask permission to use, that I would not do so, and that maybe she could let them know about the policy I told him about.

She was a bit taken aback and obviously not into the idea of having to tell anyone anything. But I realized that I wasn’t fired up with Mars-Uranus in the 1st house like usual: neither defensive toward the guy nor feeling threatened. Those two modes would be my norm, even as I’ve worked so hard over the years at healing memories of violence, bullying, trauma, and more from many lifetimes.

(The guy came to her after I walked away and I doubt she corrected his understanding of the policy, but I was fine.)

I got on a treadmill and moved on with my life … except that part of me conditioned to dread conflict and fear violence was unsure if I could really let it go. But I had. But I wasn’t – though I was … it took maybe 15 minutes to relax into not letting it be a thing. Because what happened was that a guy wanted to bend a rule that would have been unfair toward me/others, and I told him as much and that I wouldn’t comply.

That’s it. That’s all that happened.

But the conditioning by trauma can run very deep, so it took some adjustment. 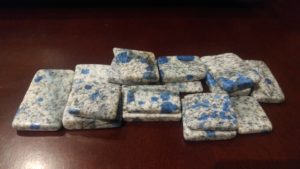 The second event was today, in the car with my girlfriend. When signs on the road indicated that we’d go to one lane in a few hundred feet, a guy in a truck rushed to merge ahead of us, changing lanes without signaling or enough clearance. I had to swerve into the opposing traffic lane (empty at the moment) to avoid him side swiping my car.

So, no accident happened, but I had the adrenaline release you might expect. But with a history of violence and trauma, that kind of thing would ruin literally my whole day. I normally wouldn’t be able to come down from the rush of it until late at night, and thought that would happen again today. I told her not to expect me to be happy and playful again right away – I’d been goofing off for an hour – but it took much less time than normal.

The rush of chemical was there, but I didn’t get stuck in it, and didn’t stay on that note. That was new.

As I thought about each scenario, I realized that the column that programmed K2 stone is creating in me seems to have been aligning my chakras in a way I hadn’t noticed. I did use it with conscious intention-setting almost every day for over a week but, as I noted in the first post, my brain wasn’t working as it normally does with so much time spent carrying moldavite, what I’ve become used to for quite a while.

Most crystals I’ve worked with, and all those I’ve programmed and offered to others so far, seem to help a person best when used with some consistency. With K2, I’m noticing that I can check in with it, holding it for 20 minutes or even just a couple, and then put it aside and go on with my life with it helping.

The other thing I forgot to mention is that when I began holding it and setting intentions, I focused on getting the Soul’s Journey Soundbite Database completed. It’s been on my mind for a year and half and needed a push to finish it.

I didn’t use K2 the next day, but found myself studiously and methodically attacking the to-d0 list. After a handful of days I realized that I had gotten a ton done, and set it up for launch in the process. That’s more organized and focused than I’m accustomed to being.

So it seems that I can plant a seed with intentions while using it and then put it down and benefit from the effects.

About the trauma and alignment, a few months ago I wrote a document about how I see trauma when doing energy work – what it looks and feels like to me as an energy worker. 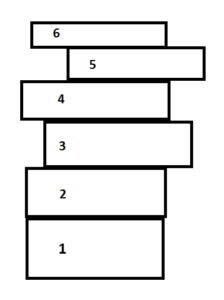 The diagram at left has boxes that represent elements of the energy field. You can imagine chakras as the boxes, but it’s sometimes not that specific as trauma imprints can be in the body or subtle bodies and not directly associated with a particular chakra.

Trauma (and chronic stress) can leave a portion of the energy field and consciousness out of place, sort of pushed to the side. I’m feeling my own field a bit reshaped from the K2, and today in meditation I even breathed in through my root/1st chakra and my crown/7th simultaneously, a technique I often bring into channeled meditations and energy work events and sessions. (To try this, get my free 13-minute grounding meditation from tdjacobs.com – click on the green forest path pic.)

K2 is granite, great for grounding, with circles/blobs of azurite, which is high-vibrating. The combination is said to help you reach your greatest potential, getting grounded while also raising your vibration. What I’m seeing the last few days is that aligning the field and consciousness is an early step in the effects K2 can have, as trauma and things in your field otherwise being out of whack will definitely hold you back from what you can and want to do.

Stay tuned for more. And when my road trip to and from UAC is done in early June, I’ll be posting programmed K2 pieces to my site so you can experience this, too.

In the mean time, check out all of my programmed crystals at tdjacobs.com.