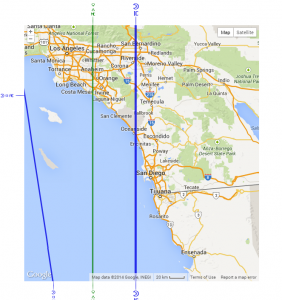 I’m in Encinitas, CA for a couple of days following Steven Forrest’s Apprenticeship Program meeting. This part of Southern California has my Moon/IC line going over it, which means that were I born here on the same day at the same time as I was born in Ohio, my natal Moon would be on the Nadir (the bottom of the chart or the beginning of the 4th house).

Being on an IC line calls for introspection and quiet, and allowing an inner process to unfold. In Alpine, CA, where Steve’s program is held, I experience a sense of belonging, and one of family. I’ve been going there for 10 years now, but I felt it right away the first time I sat in that group for a 4-day intensive. Coming back now, it’s like visiting family in addition to going to astrology school.

In Encinitas, though, I’m quiet and a bit withdrawn, concerned with emotions and needs. I’ve felt pretty tender the last couple of days, and with little impetus to do anything of practical value, which is my norm as I live on my Saturn/MC line in Tucson, AZ. Normally, I’m doing and planning more doing, feeling pressure to get ideas and tools manifested for others to use.

I’m feeling ridiculously cuddly most of the time and, honestly, can’t think much or very straight. I’m in the process of putting together tomorrow’s The Soul’s Journey radio show, and it’s hard. I’m on the verge of whining to myself that I’d rather not think so hard and really don’t want to have to perform. Not like I’m not into it – no, I am almost whining internally.

Last night there was a moment wherein my girlfriend was getting ready for us to go out and I was playing games on my phone. I was detached from everything and felt like I did as a kid when getting ready to go somewhere, which meant waiting for others to get ready. I think was 8 years old again and when she was ready, I just kind of ambled toward the door and asked, “You know where [our destination] is?” She said she did, and I asked next, “You know how to get there and you’re driving?”

That’s all I needed to know. As long as I wasn’t going to be expected to be or act like an adult.

I can do the show.

I will do the show.

The show will be good.