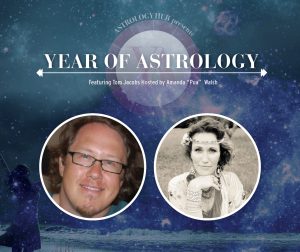 I’m honored to be invited to be part of Astrology Hub’s Year of Astrology. Beginning the end of January 2017, each lunar month a different astrologer will be featured (13 in total).

The teachings each month will be organized around a theme related to specific lunations and current-event planetary happenings.

I’m excited about this because it builds community and exposes more people to more astrologers and their approaches to this interpretive art than they might otherwise encounter with any regularity. Sure, we all have our favorites, but this year-long event will give many a chance to really get to know how 13 different astrologers think and see the world.

My month will be Aries. The Masterclass I’ll teach – Uranus-Eris in Aries: The Self in the Other in the Self – will be on the Uranus-Eris conjunction, happening now.

The full moon in Libra that month (10Apr17) will oppose the Aries conjunction. But more importantly, all Uranus lessons at present are tied up with Eris as they dance together in Aries. Their retro periods have essentially overlapped lately, too, so they are really moving together for a couple of years.

My take on Eris involves an archetypal process, so I make it personal. Most astrologers are looking at this dwarf planet as a mundane or collective influence, but I see it as affecting people directly and personally. I get that approach, though, because its 558-year orbit around the Sun seems to imply it’s not relevant to individuals.

But it is! When I tell Eris people Eris’s story as I work with it, their minds are blown. They can’t believe this incredibly important part of themselves hasn’t yet been articulated to or by them – it’s been so influential in their lives for as long as they can remember. I’ve been telling this story since 2011, waking people up to a new way of understanding strife, chaos, competition, and growth.

We’re just now ready to begin learning about this archetype so we can work with the energy more consciously. The dwarf planet was discovered in 2005, so it’s relatively new in astrology, but as my research on Eris’s links to terrorism going back to the end of World War I and the demise of the Ottoman Empire shows, the energy’s been with us and prominent for much longer than 11 years.

Click here to check out the entire line up for the Year of Astrology and sign up to be part of this unique event. Looking forward to creating community with you!