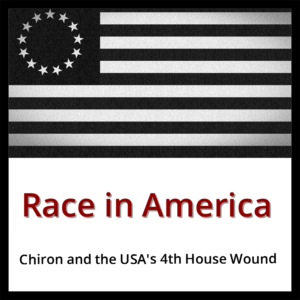 Evolutionary Astrologer, Energy Worker, and Channel Tom Jacobs begins with channeled perspectives from Ascended Master Djehuty (a.k.a. Thoth, St. Germain, Merlin, and Hermes) on the United States as a melting pot that’s really a crucible for accelerated exploration of self-vs.-other fears, pain, and power dynamics, including racism and slavery.

Tom touches on the US’s Pluto conjunct the South Node and then spends much time on its Chiron in Aries/4th house, the current transit of Chiron recently stationed retro just over the US’s IC, its next Chiron return in a few years and, most importantly, the progressed Chiron return building now that perfects in 2060 just after the US progressed Sun passes over its Chiron in 2055.

Racial violence (including police shootings after which the officers are acquitted and the recent white supremacist attacks in Portland) is part of this story as Tom seeks to explain the core of the wounding about race and the urge to demonize the other at the root of the social fabric of the United States.

Strategies for dealing with the feelings that come up amid this cultural context as this wound is laid bare more and more are suggested.

Learn more about Tom and his work, and book a consultation: https://www.tdjacobs.com.

Tom Jacobs is an Evolutionary Astrologer, Energy Worker, and Channel with an active global practice. A Level II graduate of Steven Forrest’s Apprenticeship Program (member since 2004), Tom offers consultations, ongoing coaching, tutoring, and a new series of Evolutionary Astrology classes to teach you to do astrology in the ways taught to him by an ascended master. 16 books, 2 natal reports, energetically programmed crystals, and dozens of astrology and channeled/healing mp3s are available from Tom via tdjacobs.com.