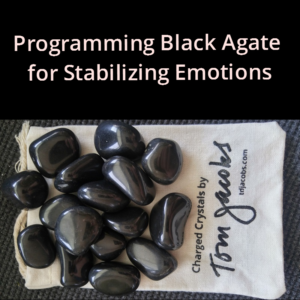 This past week I engaged in a little experimentation with putting energy into crystals. I put the heart-opening, softening energy of St. Germain into black agate, typically considered a grounding stone good for protection.

The idea was to get sweet, comforting energy into a stone that has very different qualities. It was a nudge from Ascended Master Djehuty, a.k.a. St. Germain, Thoth, Merlin, and Hermes. The point was to offer a tool for grounding and soothing the intense emotions surrounding the Capricorn full moon of July 8th.

Now I’m in Austin, TX for an expo this weekend. The drive yesterday had me focused and calm, and feeling surprisingly able to do a day’s drive on not so much sleep. I felt some of the energies coming off the programmed stones in the car, but I was vibing on one in particular.

I wondered if it was the diaspore in my pocket. It’s a little tiny faceted gemstone I picked up in Tucson in February or, more accurately, that found me then. I’ve done as much research on the healing/metaphysical effects as can be done – there is not much out there, and most of it is repeating a couple of sources that don’t have a ton to say to begin with. 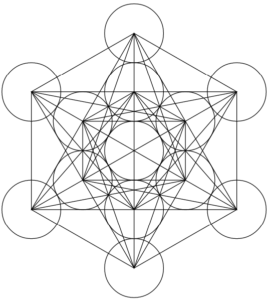 But it wasn’t the diaspore. It was auralite 23 programmed with Metatron’s energy. A few weeks ago I programmed 4 pieces with this intense energy to, basically, see what would happen.

Auralite 23 programmed in my normal way has amazing effects, but they are gentle and don’t disrupt your life in uncomfortable ways. Adding  Metatron’s frequencies to anything will boost it effects significantly, and I expected this. But I did not imagine the kinds of effects it would have – or what they would feel like.

At first, holding two put me to sleep, and I slept amazingly well. I took them to acupuncture with me, which is already relaxing, then I slept so hard there that I was altered when I woke.

So, that night I held them while sleeping and realized the next day that something from my unconscious had been shaken loose and was now on the surface. It was a part of me with anger and frustration, and it was directed at some women I’ve had relationships with as well as my current girlfriend.

It was resentment, pure and simple, and this part of me felt anything but loved. And he had a lot to say – a lot.

I used some labradorite I’d programmed with Metatron’s energy to stabilize a bit and clear my head some, but along the way I had to vocalize to myself all this resentment so this part of me could be heard and blow off some steam.

A few weeks later, I felt much better, almost back to as normal as I believe I can report (ever). It has not been on my list to keep playing with the Metatron auralite 23s any time soon, but I felt at the last minute of packing stuff in my office for the Austin trip that I should take them.

There are a lot of frequencies in my car right now, but that one is calling. Like it’s got my number and I can feel it. When that happens, like I only have eyes for some crystal, I know it’s time to work with it more.

I have this idea in my head to offer them on my site, but with no purchase buttons. Interested parties can call for what I’m thinking of as “orientation,” or a prescreening call so you know what you’re getting into. Intense energies and programmed crystals can be used to great healing effect, but we need to know how to use them and what to expect.

Programmed crystals are an immensely useful and powerful tool for shifting and evolving consciousness. Check out the offerings on my site and be in touch if you have any questions about what stone might be right for you.

Tom Jacobs is an Evolutionary Astrologer, Energy Worker, and Channel with an active global practice. A Level II graduate of Steven Forrest’s Apprenticeship Program (member since 2004), Tom offers consultations, ongoing coaching, tutoring, and a new series of Evolutionary Astrology classes to teach you to do astrology in the ways taught to him by an ascended master. 16 books, 2 natal reports, energetically programmed crystals, and dozens of astrology and channeled/healing mp3s are available from Tom via tdjacobs.com.