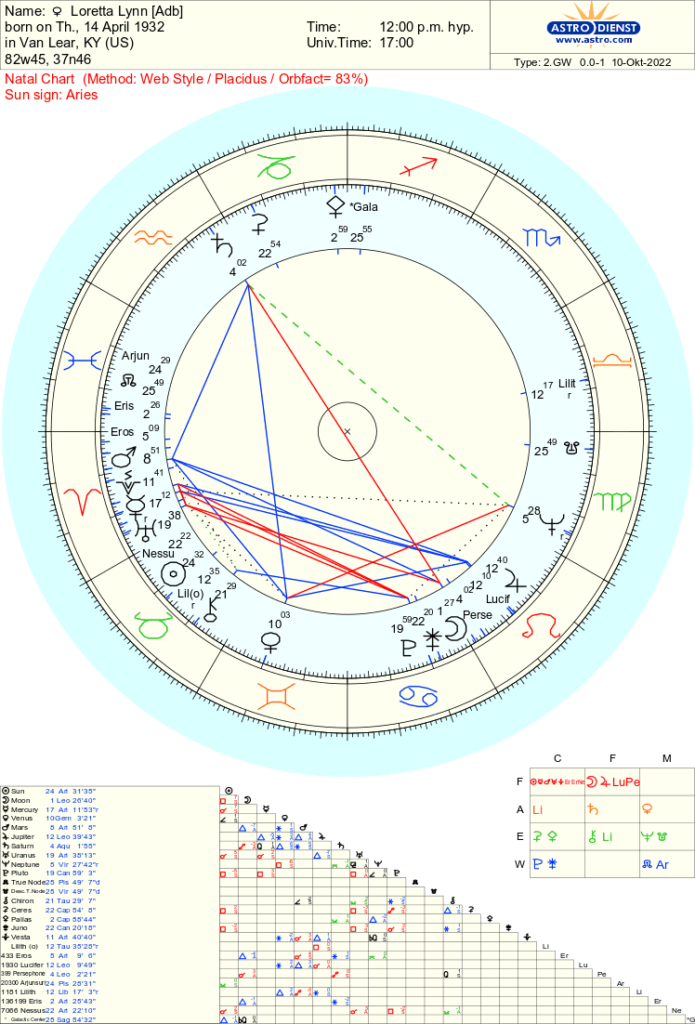 Mediumship notes: Went to Vancouver, WA today for raw goat milk, which I do every two weeks. Driving, heard “Fresh Air” podcast of an interview with Loretta Lynn from 20ish years ago, as she passed away on Oct 4th.
An exchange about her children was confusing, and by the end of two fragmented sentences between Terri and Loretta, I knew she’d had 3 miscarriages. Terri said “6 kids”; Loretta said “3 died”; there was a weird pause and I felt there had been 9 pregnancies and 6 births. The pause that made me imagine L was signaling to T to not say more. I just knew there were 3 miscarriages and started bawling my eyes out on the 26 highway.
And it was gushing. I figured it was an overlap and I was simply activated, as I have definitely been grieving other-life loss of children. But it was crazy strong and kept going and I wondered if I was getting connected to L. It was the better part of a half hour of intense bawling, with some lesser crying later.

Well tonight I just looked up her astrology chart and it happened again and I saw that some 3rd party has brought her to me to help her process. Normally as a medium, I’m not co-opted to help someone process, but it seems like a deal (through guides) that in the long run will also help me. She gets to progress into the next phase, and I can I guess “piggyback” my grief with hers and cry a ton of it out. So that is weird.
Looking up her chart, I kept having my hand go to edit the birth place listed as “Van Lear, KY” because she kept telling me that it’s Butcher’s Holler, which was made famous in “Coal Miner’s Daughter” song–heard it in the interview today and was reminded. So I kept hitting “edit birth place” over and over again, and that confirmed that I had her with me. I can’t hear a voice but have a sense of mental info and “yesses and nos” from her mind and heart.
I found the sorrow from the 3 miscarriages locked up behind walls, as if she never talked about them. Or tried not to have to feel the grief. Also of the 6 births, two predeceased her:
From Wikipedia:
Loretta and Oliver Lynn had six children together:
Betty Sue Lynn (November 26, 1948 – July 29, 2013)[57][58]
Jack Benny Lynn, (December 7, 1949 – July 22, 1984)[58][59]
Ernest Ray “Ernie” Lynn (born May 27, 1951)[citation needed]
Clara Marie “Cissie” Lynn (born April 7, 1952)[citation needed]
Peggy Jean and Patsy Eileen Lynn (born August 6, 1964; twin daughters named for Lynn’s sister, Peggy Sue Wright, and her friend, Patsy Cline.)
And Jack, Wikipedia reports, died of a drowning on or near the family property in a river, but it appears the miscarriages were held inside her as children she never got to love (Pluto in Cancer), and the grief got all locked up. So PL in CN can relate to loss of family, and grief that is devastating. Or the inability to be there for loved ones, or being separated from loved ones, etc. All of it. But the sense of unrequited love from the 3 who weren’t born is particularly hard for her.
Feeling into it more: Shit. Unprocessed grief regarding certain other-life loved ones, at least two of those as children lost/died, and she was … not aware of waiting for them but feeling their loss again, piled on top of the other-life loss unprocessed.
In my experience doing this work, miscarriaged pregnancies seem to rarely have a soul “assigned” to them. But my sense here is there were not souls assigned but she had an intuitive sense that these unborn ones were lost ones from another time she craved to get to love. And be together with.
As in, she longed to be reconnected with certain other-life loved ones she wasn’t aware of but had a sense of, like craving to be made whole again by reconnecting with lost other-life loved ones ——
And there it is: She was one of the other-life loved ones I lost in the post-Reconstruction life I’ve been trying to heal. She and I just were told that. So that “—-” above represents a pause for explosive crying.
She’s doing pretty well. She’s watching me open to her feelings and energy is leaving the walled-in place behind her heart.
To my knowledge, (so far) I haven’t met any of them in this life. And this other-life 14-year old in me cries almost daily about it. Feeling alone in the world, nowhere to belong, nowhere to go. Nowhere to be. Wondering where my family (from that life) is. So that is
Now we’re just hanging out, post-cry. I thanked my guides for bringing her. I don’t know if there’s more later.
Well I guess that’s it.
(Your brains might want to go to synastry and see what’s there, but more important would be looking at the two charts as “maps of themes” as described in The Soul’s Journey I to really understand multilife connections.)